China’s global goals and alliances threaten the world. Here is why

UN envoy to Hamas: ‘You have the right to fight Israel’

“[At] other conferences, people walk around, they shake hands. At JNF, everybody hugs. That’s what you do at a JNF conference. It’s family,” Dr. Sol Lizerbram, president of the Jewish National Fund-USA (JNF-USA), told attendees at a gala dinner to close this year’s annual national convention in early November.

Many JNF-USA members gathered in a ballroom at the Omni Boston Hotel at the Seaport in Boston agreed.

The attendees—who had been working on various projects, or “visions,” in Israel, and had spent the past three years working remotely due to the COVID-19 pandemic—were excited to see the friends from throughout the country who they had grown accustomed to reuniting with at the conferences every year.

Many things have changed in the years since JNF-USA’s last in-person national conference in 2019, and they were discussed in nearly every plenary session and breakout meeting of the conference.

The attendees, many of them leaders promoting Israel and Zionism in their regions, felt acutely the sharp rise in antisemitism and were attending the conference to arm themselves for what they believed would continue to be a battle in the coming year.

The conference weekend, Nov. 4-6, came a day after Brooklyn Nets player Kyrie Irving linked to a film promoting an antisemitic conspiracy theory on Twitter—and attendees were abuzz with the story during Sunday’s lunch, thinking of ways they could respond collectively and individually. There were rumblings about calling for Amazon to remove “Hebrews to Negroes: Wake Up Black America,” the book and film Irving tweeted about as it was climbing up the website’s sales charts.

Just a few weeks before the conference, the rapper Ye (formerly Kanye West) began his series of antisemitic posts and interviews. Speakers and attendees tried not to mention Ye by name, but acknowledged the uphill battle that Zionist Jews face on social media going against two people whose follower count was more than the total population of Jews in the world.

Total attendance at the conference was 1,400, of those, 600 were either high school or college students, and approximately 60% of attendees were younger than 40.

The goal of the conference was to show that Zionism—the right of Jews to self-determination—is a mainstream movement despite how Zionism’s enemies attempt to define it.

Lina Kanchik, from Livingston, N.J., was attending her first JNF conference. She told JNS that it was important for her to see the organization focus on bringing in younger people.

“I kind of kept saying the entire weekend, that there’s all the young kids and there’s a lot of much older people. So there’s kind of a big gap between the 30-, 40-, 50-year-olds. So it’s very important to bring the young kids into this and give them a sense of belonging and a sense of loving Israel,” Kanchik said.

Kanchik, who has a son serving in the IDF as a lone soldier, said that she was inspired at the conference and in awe of the work the organization does, despite overarching fears of antisemitism.

“On the one hand it was very positive. On the other hand, it was kind of like doom and gloom,” she said. “But then it was positive because we’ve been here for centuries combating this and we will always  persevere.”

One of JNF-USA’s proudest projects is the Alexander Muss High School in Israel (AMHSI), which this year celebrated its 50th year. The school hosts American high school students for a semester in Israel, continuing not only their essential secular education but also Jewish and Israeli history classes, along with visits to important and historic sites throughout the country—building the students’ sense of Jewishness and leadership.

A special plenary session was held on Sunday morning to celebrate the school, which included interviews with alumni of the school.

But tThe point was made that through multiple generations, the school has been able to instill a love of and connection to Israel in many young Americans, who continue to be involved in pro-Israel leadership throughout their lives. 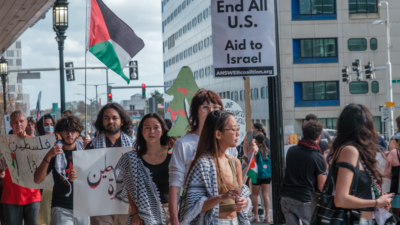 A pro-Palestinian protest outside of the JNF-USA conference. Credit: Dmitriy Shapiro.

A few times during the conference, a pro-Palestinian group formed a picket line in front of the hotel. Police were on the scene as approximately 40 to 50 protestors—mostly white college-aged kids with a few of retirement age—marched a picket line chanting traditional far-left protest chants. They held signs accusing JNF-USA of stealing arable land from the Palestinians due to the organization’s work alliance with KKL-JNF in Israel, whose longtime project has been to plant trees throughout the Jewish state.

As they protested, a group of high school students attending the conference formed in front of the building to gawk at the protestors, laughing at them amongst themselves.

“We probably know more Arabic than they do,” one of the students said, pointing to his friend who was fluent in Arabic in contrast to the all-white protestors.

The protests were organized by the same groups which were roundly condemned earlier this year for creating a map of Jewish organizations throughout the greater Boston area, protesting under the hashtag #ShutdownJNF.

Attendees included people from all segments of the Jewish world and religious denominations, but a significant portion of the weekend was dedicated to how the majority of Jews—who tend to be politically liberal and support left-wing social justice causes—can maintain their Zionism as these groups openly turn to exclude Jews and support BDS.

One plenary session—titled “How Can One be Progressive, LGBTQ, a Person of Color, Left Wing and Pro-Israel? Easily” — featured Israeli writer, speaker and activist Hen Mazzig, who is gay.

Mazzig, who runs a social media training organization in Tel Aviv, said that Jews have to speak up and be proud of who they are.

“[Late San Francisco Board of Supervisors member] Harvey Milk said that if a bullet will kill him, he wants this bullet to open every closet, of every door that gay people are hiding inside. And once we are out, people will respect that and see that we are everywhere, that we are their father, their child, their brothers, their friends,” Mazzig said. “And same for the Jewish community. If we come out as Jews everywhere, if we wear our Star of David everywhere and we’re not hiding it, people will respect it. To gain respect again, and to make people see us as human, we have to show up and be proud of our identity.”

He said that Jews should not allow people who are antisemitic to hide behind being “anti-Zionist.”

Mazzig said that it was important to remember that Jews are indigenous to the land of Israel just as the Native Americans are to the U.S.—and that despite being in exile, longing to be back in Israel remained in the culture and is being realized through the existence of Israel.

Logan Levkoff-Cortes, a sexuality educator and chairperson of JNF-USA’s Caravan for Democracy Leadership Mission to Israel, said she has watched communities and organizations that she supported and defended on the front lines turn against Jews and support the Hamas terrorist organization.

“It is a basic tenet for us to want to heal the world, but I’ve come to understand that healing the world has never, should never, come at the expense of us,” she said to applause at Sunday’s afternoon plenary session. “And I think we tend to do that in the fight for social justice issues which are critically important, but it starts with us and we take care of ourselves, and then we can join the fight with everyone else.”

Throughout the plenary and breakout sessions, one of the topics that concerned attendees the most was social media, where Zionism has taken a beating from far-right and far-left individuals, aided by celebrities. A number of sessions not only urged the attendees to join the fight on social media but also taught them how.

Sports broadcaster and Hofstra University student Emily Austin said that she was disappointed that too many Jews are unwilling to engage antisemites on social media and support other Jews who are confronting antisemitism.

“I found that when it comes to people having to support me, my Jewish brothers and sisters have been silent. But it’s not like they’re silent on sports posts and football posts and commenting on other things, but when it comes to the real deal, your identity, your Zionism, your Judaism, for some reason it seems like we’re not active when it comes to those matters and my question is why?” Austin said in a panel discussion. “Are you afraid? And if that’s the case then what is the wake-up call going to be that you have to be the voice.”

Social media creators cannot be the only voices fighting antisemitism, she said. And even if people are not willing to put themselves out there, they can at least amplify the voices of those who do.

The conference also displayed the numerous ways to get involved in helping Israel through JNF-USA.

Marina Kirshenbaum said she joined the organization 18 years ago and later joined the Gaza Envelope Task Force, which helps improve the lives of people living on the border with Gaza. In Sderot, the task force built an indoor playground that doubles as a bomb shelter in an area where residents—as well as children—have only 15 seconds to get to safety from Hamas rocket barrages. The organization also built a “resilience center” in Eshkol, providing kids with animal therapy.

As a mother of three young children, Kirshenbaum saw the Sderot playground in 2014 and was affected.

“I couldn’t imagine my children not being able to just play and be children,” she told JNS. “And when I saw that it really hit home to me and that’s when I got involved with the Gaza envelope.”

“So if there’s anything that you feel particularly attached to, we have that,” she continued. “So for me, it’s Gaza Envelope.”