What is the Shura Council? 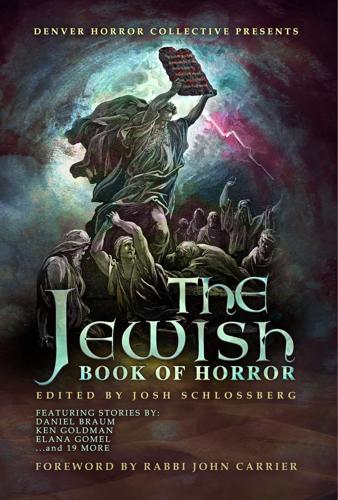 Columbus resident Rami Ungar has been in love with storytelling and horror since he was a child, first being inspired by Harry Potter and then Stephen King.

But Judaism has also been a constant influence throughout his life, which is not much of a surprise as the son of two rabbis. His father is Rabbi Michael Ungar of Beth El-The Heights Synagogue in Cleveland Heights, and formerly of Congregation Tifereth Israel in Columbus. His mother is Rabbi Wendy Ungar, a hospital chaplain who will be joining The James Cancer Hospital and Solove Research Institute at The Ohio State University in Columbus.

For Ungar, the Jewish experience lends itself to the genre of horror given the centuries of persecution the Jewish people have faced. He has taken this inspiration and applied it to his latest work, a short story called “The Divorce from God.”

“The Jewish Book of Horror” is for sale for $15.99 at Amazon, Barnes & Noble, Bookshop and IndieBound. For more information, visit denverhorror.com/the-jewish-book-of-horror.

The story will be part of The Jewish Book of Horror, a collection of Jewish horror stories that were written primarily by Jewish writers, to be published by the Denver Horror Collective this Halloween.

The Columbus Jewish News caught up with Ungar to learn more about his craft.

CJN: What inspired you to become an author?

Ungar: I was introduced to Harry Potter as a kid and I fell in love with the storytelling and world building. I wanted to create worlds and stories like Harry’s, so I started writing. Of course, being a kid, my attention would often travel elsewhere to other dreams. ... But I always came back to writing, and eventually when I was 10, I realized that was what I was going to do.

CJN: What drew you to horror writing?

Ungar: Several things, but Stephen King was the major influence. I read “It” when I was 12 or so and was terrified of Pennywise. At the same time, though, I couldn’t turn away. I finished reading it at camp (Camp Ramah in the Berkshires in Wingdale, N.Y.) that summer, put it down in awe and had a quiet epiphany that stories like “It” were what I wanted to write.

CJN: How did growing up in Columbus influence you?

Ungar: I love Columbus. I’ve lived here since I was 9 and it’s such a big, diverse place with so many interesting people and hidden surprises. ... It’s no surprise that some of my stories are set here.

CJN: How has your Judaism been an influence and is that still a part of your life?

Ungar: I can’t imagine what my life would be like without the Jewish influence. I went to Columbus Torah Academy and to United Synagogue Youth conventions. I was at Hillel every Friday night. ... I still see myself as a Jew and as guided by many of the precepts in the Torah. Judaism is as much a part of me as horror writing is, though it doesn’t decorate my walls as much. ... I don’t go to synagogue very much, but I do say the Shema every night before bed and I keep a kosher home. I am a very spiritual person and feel that Hashem has a hand in my life, though how much He influences is up for debate.

CJN: How does the horror genre relate to Judaism?

Ungar: I think the Jewish people are a people used to horror. From our earliest beginnings, we’ve had to deal with enemies bent on subjugating or annihilating us. It’s no wonder that our most famous monster, the golem, is depicted as a protector of our people. We need it. That might also be why we don’t have as many supernatural threats as other religions and cultures do. Besides these entities being subservient to Hashem, do we really need them?

That being said, I think there’s plenty to mine from our culture’s history. It’s why I’m so excited to be part of The Jewish Book of Horror. As far as I know, it’s the first book of its kind, so we may be able to start a trend of dark and terrifying stories through a distinctly Jewish lens that hasn’t ever been seen before in literature, let alone Jewish literature.

CJN: What have you written so far?

Ungar: I’ve been lucky enough to publish four books, two self-published and two traditionally published. Some of my best known work is “Snake,” about serial killer hunting members of a mafia gang; “Rose,” about a young woman turning into a plant creature; and “The Pure World Comes,” about a Victorian maid who goes to work for a mad scientist. I have also written a number of short stories, many of which have been accepted for publication in recent years.

The one being published in The Jewish Book of Horror, “The Divorce from God,” follows a rabbi who’s something of a criminal kingpin and what ultimately ends his empire. Sometimes you have to talk about the darkness in your own religion.

CJN: How do you come up with your book ideas?

Ungar: Oh, everything inspires me. ... “The Divorce from God” was inspired by an actual rabbi involved in criminal activities. Another story of mine that’s releasing soon, “Natural Predators,” was inspired by experiences at the Jewish summer camp (Camp Ramah) I attended as a teen. And some of the ideas I have, like “Rose,” pop into my head while I’m just going about my everyday life.

CJN: How do you define horror?

Ungar: I think you define horror by the whole intention to scare you, to get you to consider the possibility of a world full of terrors and to unnerve you. “Disturbing your inner zen” is how I like to phrase it. If it disturbs your inner zen, even just a little, it can be considered horror.

CJN: How do you build up a sense of fear in readers?

Ungar: Part of it is just taking what I myself have experienced from reading and watching endless horror stories and applying it to the stories I write.

CJN: What do you feel makes you stand out as a storyteller?

Ungar: I like to take my interests and hobbies and put them into my stories. Many of my stories have characters who are fans of anime and manga or ballet, which I enjoy, and “The Pure World Comes” was a love letter to the Victorian era, as well as to Gothic literature. I also like taking weird concepts and turning them into horror stories. I mean, “Rose” is about a young woman turned into a plant/human hybrid. If that’s not weird, what is?

CJN: What is your next writing project?

Ungar: I’m actually getting ready to start a new novel about a mummy. The protagonists of that story will be Jewish, so I think it’s likely some Exodus themes will show up in the story.

CJN: What else would you like readers to know about you?

Ungar: I think readers will enjoy that my stories come from such an eccentric mind and that I put so much of myself into my stories. I also like hearing back from readers, so if you read one of my stories, try to let me know what you think.

Ungar secures publisher for his collection of shorts

How concerned are you about monkeypox?