The lawsuit states that Jeremy Fox and others breached a contract between the entities by reopening Block’s Bexley and North Market locations as Fox’s, while purchasing a competitor’s business, using equipment and food from Block’s Bagel’s, and abandoning its financial and legal obligations to Block’s Bagels. At issue are two shops at 3012 E. Broad St. in Bexley and 59 Spruce St. in North Market in Columbus.

“I share this update regretfully as I try to keep personal matters personal,” Harold Block wrote in an Oct. 12 statement provided to the Columbus Jewish News. “However, Jeremy Fox’s actions as it relates to the Broad Street bagel shop formerly named Block’s Hot Bagels, risks the livelihoods of my employees – I cannot sit idly by and watch this happen.

“While Jeremy (Fox) tries to positively spin his new bagel shop’s name and origin story, it should be known that Jeremy and his company have failed to pay for the Block’s equipment they have been using and have not paid fees owed under the agreement now totaling into the six figures,” Block said in his statement.

“The situation turned sour when my son, Steven, was in his final weeks battling cancer this past February and March. Behind our backs, Jeremy purchased a competing bagel production facility that he is now using to supply his bagel shop, which we believe violates our long-term supply agreement. While we’ve tried to navigate this situation privately and reasonably, we do not believe Jeremy has worked with us in good faith. It wasn’t until we saw a post Jeremy made on Facebook that we were made aware our relationship would be abruptly ending. We had already purchased the ingredients and food we thought he needed for the next few weeks.

“I’m 89 years old, my plans at this stage of my life didn’t include a legal fight to try and obtain what is owed from a business partner who we helped establish and set up for success,” Block wrote. 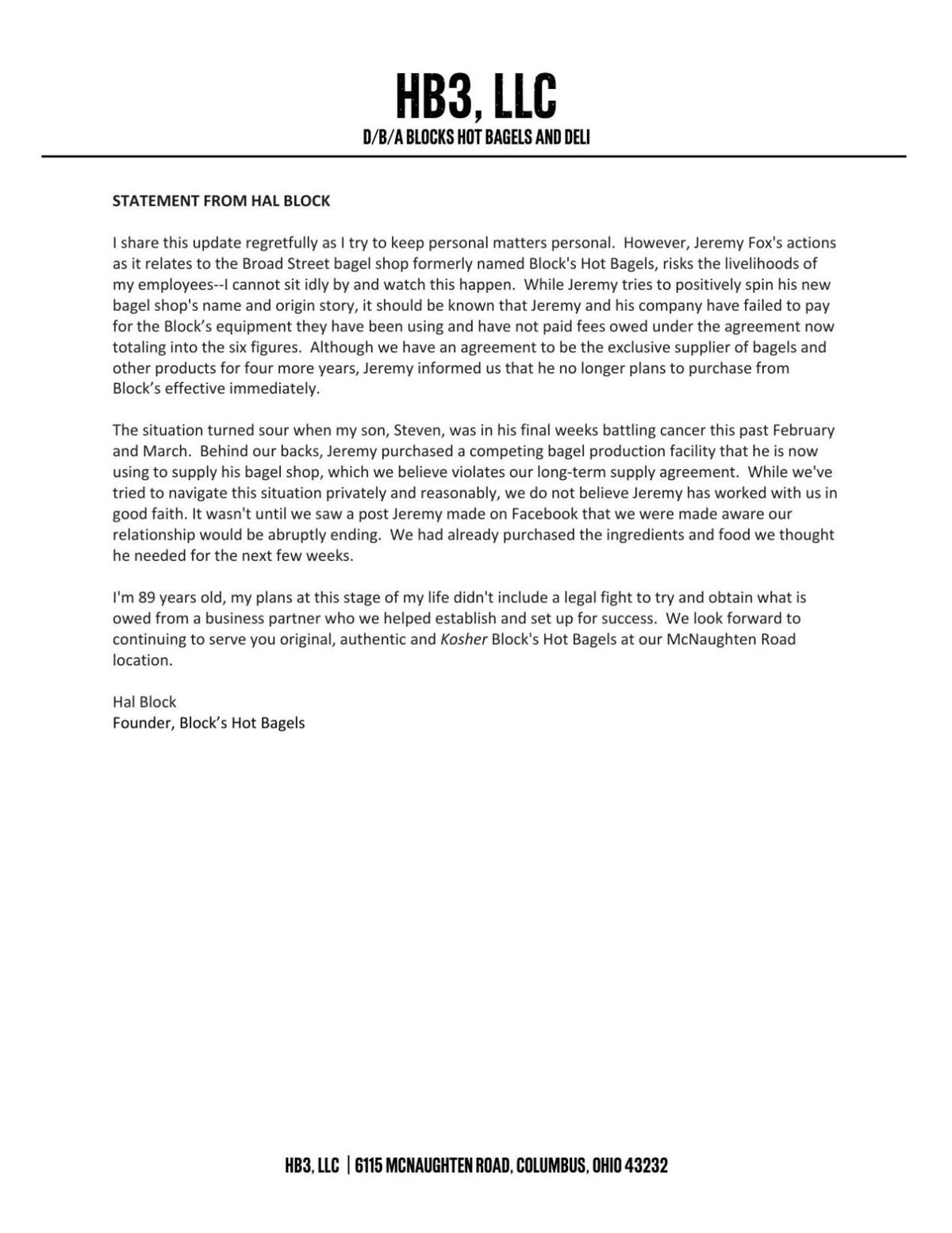 Block, owner of HB3, which operates Block’s Bagels, opened a bagel shop in Columbus in 1967 using recipes from an uncle who had a bakery in New York City.

When contacted by the CJN for comment, Fox’s lawyer, Andrew Clark of Onda LaBuhn Ernsberger & Boggs Co., LPA in Columbus said he was unaware of the lawsuit and could not comment.

Jeremy Fox could not be reached for comment but previously told the CJN, “Originally our license agreement was intended to be a short-term solution. It’s been nearly six years now and it was time for us to go our separate ways.”

As a result of the change, he said, “We will now have more freedom to operate and expand our menu to better fit the community and its ever-evolving needs.”

The 10-count lawsuit alleges fraud, breach of contract, alter ego, conversion, tortious interference and seeks a temporary restraining order and permanent injunction as well as declaratory judgment, unjust enrichment, civil conspiracy and alleges a violation of Ohio’s uniform fraudulent transfer act. The lawsuit estimates damages at $150,000 in unpaid performance bonuses, $137,500 in unpaid license fees, unpaid equipment costs estimated at $150,000, as well as a loss of sales to HB3 of $400,000 annually.

According to the lawsuit, on Oct. 2, “Fox posted to a Bexley, Ohio, Facebook group that ‘officially the Block’s Bagels Bexley location and North Market location are closed. Both locations will now be Fox’s Bagel & Deli.’”

The lawsuit adds, counsel for Fox notified counsel for HB3 Oct. 3 “Fox’s Foods is no longer a going concern,” and that “Fox had made a ‘decision … to sell the existing operating assets of Fox’s Foods (sic) LLC,’ and that the purchaser ‘will now be operating the Bexley and North Market stores as ‘Fox’s Bagels and Deli’ without any affiliation with HB3.”

Block’s claims that this move violated legal agreements between the parties regarding use of supplies, equipment and the Block’s name, causing both short and long-term financial losses.

“At the time of defendants’ notice to HB3 of its claimed abandonment of the supply agreement, HB3 had already purchased $10,000 in perishable foods in preparation for its continued production of products to meet its obligations under the supply agreement,” the filing said. “This food is nonreturnable and will be useless within 14 days. Sammy’s (Bagels) now provides bagels” to Fox’s.

The 10-year supply agreement allowed Fox’s Food the right to use the name Block’s, as well as “intellectual property rights in connection with the sale, marketing and distribution of bagels and related baked and deli products at and within a two-mile radius of the Bexley store,” the suit said.

In exchange, the parties agreed HB3 would be the exclusive supplier of “all bagels and bagel-related products, breads and challahs, desserts, chicken salad, tuna salad, egg salad, and cream cheese … at wholesale prices set by HB3.”

The agreement also provided a license fee and performance bonus payments from Fox’s Food to HB3.

While the supply agreement allowed Fox an option to purchase HB3 for an agreed amount within two years of its signing, that option was not exercised, the suit said.

Instead, Fox purchased Block’s competitor, Sammy’s Bagels, LLC, in February or March of 2022 “in bad faith” in an “attempt to find a way to terminate the supply agreement,” according to the lawsuit.

“The plan involved forming a new company (FRG Enterprises, LLC) causing Fox’s Food to transfer its assets to the new company, operating the Bexley Store and the North Market Store under a new name, and then claiming to HB3 that Fox’s Food was no longer a ‘going concern’ (i.e., out of business). … To accomplish this obvious sham, Fox formed defendant FRG in July 2022,” the filing said.

Block’s Bagels’ two satellite locations in Bexley and North Market closed Oct. 3 and reopened as Fox’s Bagels & Deli, an employee at the B…