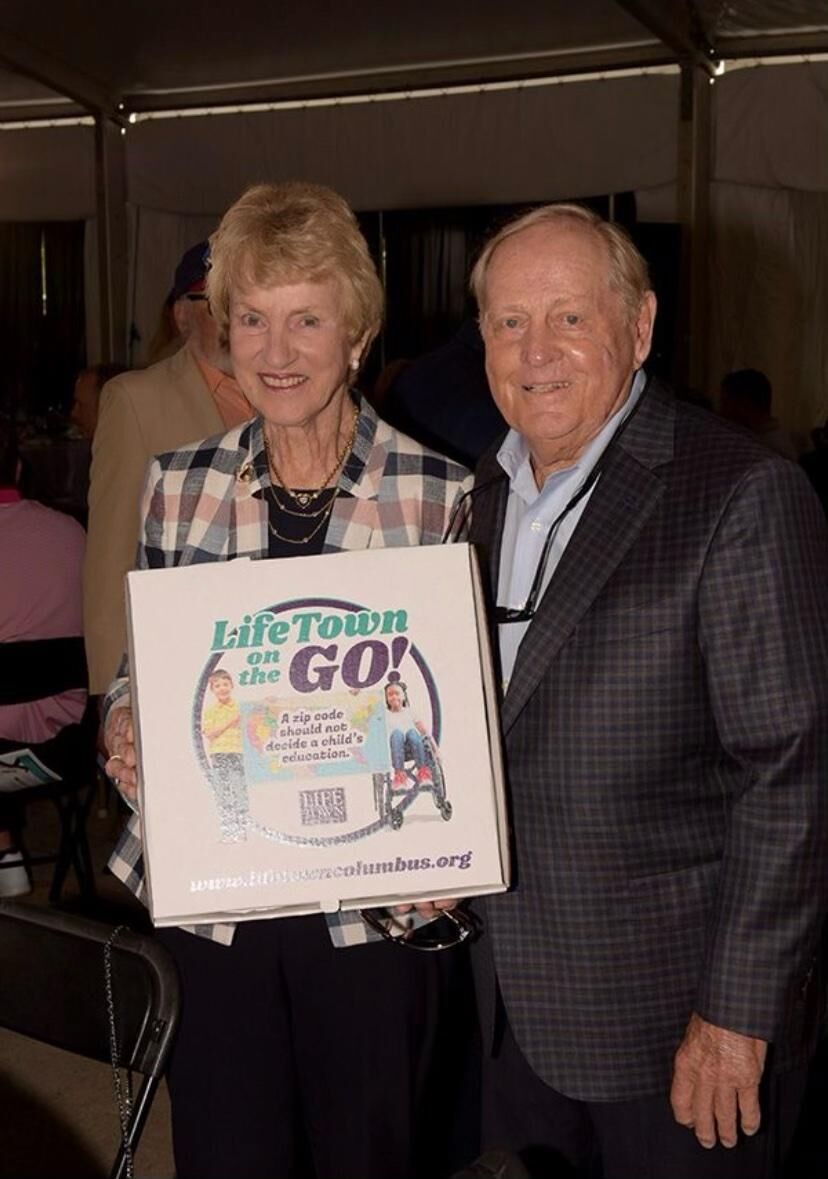 Barbara and Jack Nicklaus display a box with items that students with special needs used during the pandemic isolation. 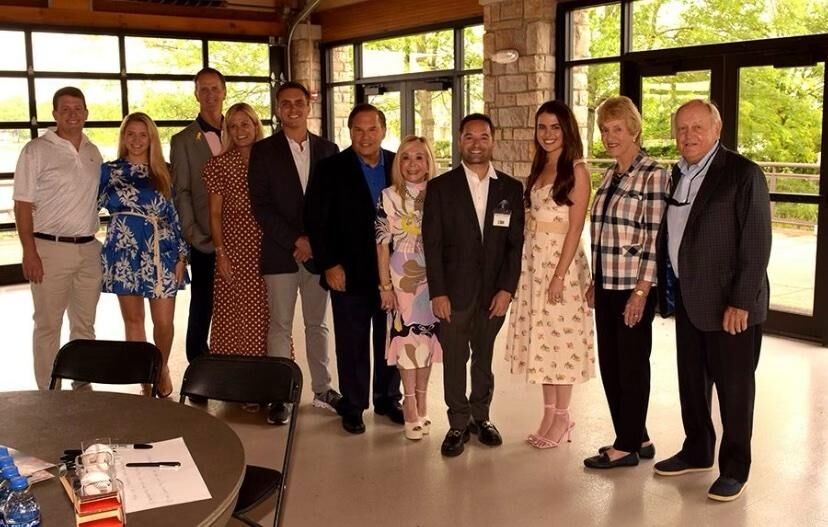 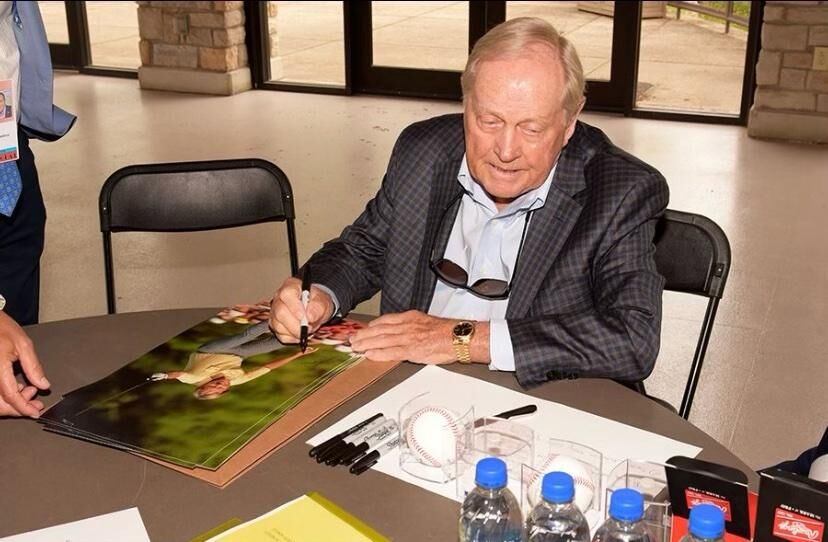 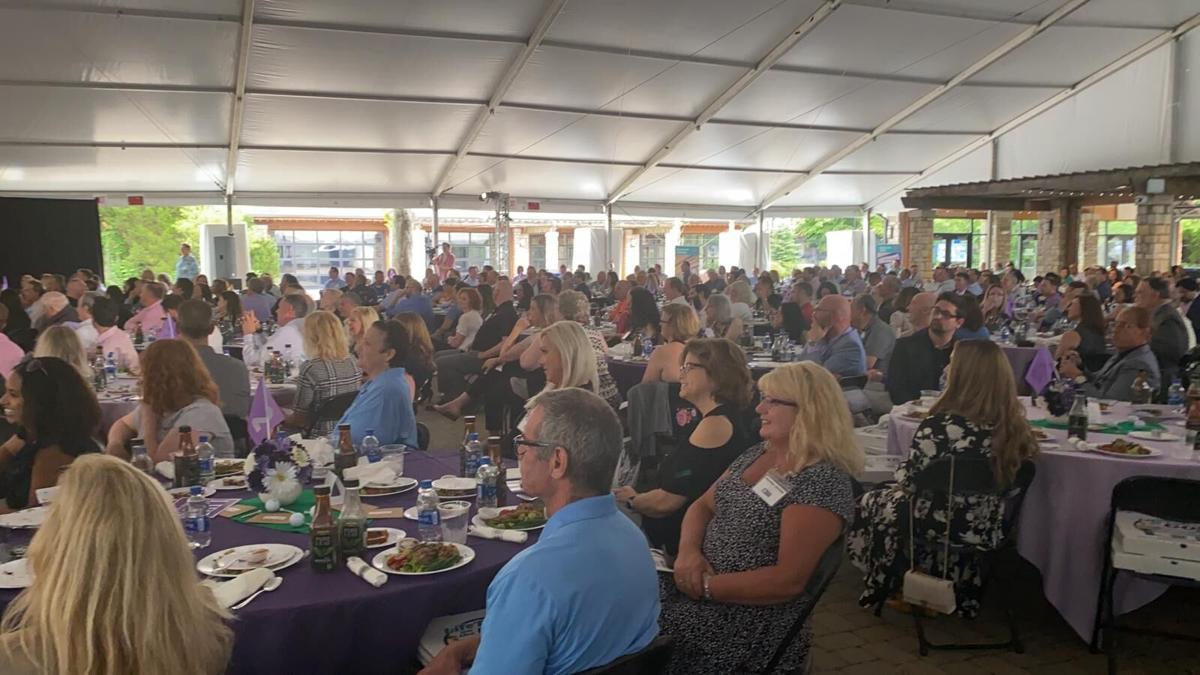 A total of 460 attendees gathered for Lifetown’s 2021 Legends Luncheon on June 4.

Columbus native Jack Nicklaus, one of the greatest golfers of all time, headlined LifeTown’s 2021 Legends Luncheon on June 4, sharing personal stories about his work with children’s causes and calling for support of the organization’s work.

LifeTown, housed and run from the Lori Schottenstein Chabad Center in New Albany, is a realistic, indoor city created to provide children with special needs opportunities to learn about real-world scenarios in a fun, engaging way.

The event began with Esther Kaltmann, LifeTown’s director, sharing a personal story with the 460 people in attendance, which illustrated how much LifeTown’s mission means to her. Recounting the story of her grandmother receiving her citizenship after fleeing the Nazis in 1938 and the sense of belonging that came with that, she said she wants the same for the children who come to LifeTown.

“My only hope for each and every one of them is to feel a sense of belonging and hope for the future,” she said. “And for isolation to be a forgotten memory.”

Nicklaus and his wife, Barbara’s passion for helping children led them to leave Nicklaus’ own golf tournament, the Memorial Tournament in Dublin, to speak at the event in support of LifeTown.

Nicklaus did so because he said LifeTown’s work helping children is an issue he is passionate about. His support of such causes began in 1966, Nicklaus said, when his daughter developed pneumonia, requiring several days of recovery in a hospital. It was at that point that Nicklaus and his wife pledged to help children as their daughter had been helped.

“We sort of looked at each other, we said if we’re ever in a position to help others ... we wanted it to be children,” Nicklaus said.

Nicklaus, who won a record 18 major championships and won U.S. amateur and college titles while attending The Ohio State University in Columbus, has a long history of providing charitable support to children’s organizations in Central Ohio and throughout the nation. This support included a $60 million gift to the Miami Children’s Health System in Florida.

Nicklaus told the story of a young girl whose parents were told she would die soon due to abnormalities with her heart, that there was no hope for her. But, with the right support and the right doctor, her heart was healed and she now has a full life ahead of her.

“Barb and I have fallen in love with this little girl,” Nicklaus said as he became emotional retelling the story, one of hundreds of stories Nicklaus said he’s heard where children’s lives were changed forever by the kindness and support of others.

Nicklaus told the attendees that helping children, seeing them grow and thrive despite obstacles, and visiting them means everything to him.

“It’s far more important to see every one of these kids than any 4-foot putt I’ve ever made,” Nicklaus said.

And he urged attendees to do their part by supporting LifeTown.

“You are all here today for one reason, to help those kids,” he said, before urging attendees to donate to LifeTown.

Kaltmann thanked Nicklaus and attendees for their support.

Those donors include Brian Schottenstein and his family. He was a 2020 Columbus Jewish News 18 Difference Maker and LifeTown Legend award winner, who has long supported LifeTown and who helped set up Nicklaus’ appearance. Those supporters also include the event’s honoree, Atlas Butler, a heating, cooling and plumbing company that has served the Columbus area for the past century.

Atlas Butler CEO Mark Swepston said in a news release there is a great need to help the most vulnerable among us, especially given the difficulties of the last year.

“Our community has been hit hard by the pandemic, and we believe we have a responsibility to help now more than ever,” he said.

Kaltmann said he has great hope for the future as supporters of LifeTown, like those in attendance, continue to do so much on behalf of children with special needs.

“I see a brand new world, I see a more inclusive world, children who have never been able to receive the education, they deserve their birth rights,” he said. “And now being recognized by our community as full and valued members of society. I see a more loving world, a world that is ready to fulfill the hopes and the dreams of every single child.”