You are the owner of this article.
Edit Article Add New Article
You have permission to edit this article.
Edit
News
COVID-19
Features
Opinion
Community
Obituaries
Events
Current Issue
OJC Archives
Share This
1 of 9 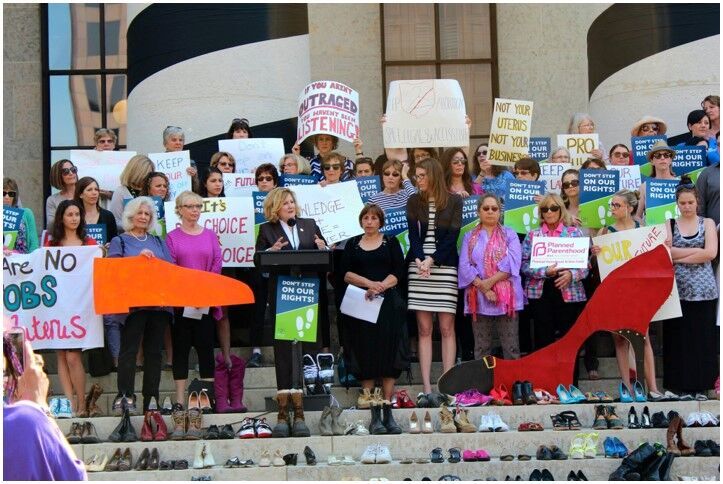 More than 200 women from Greater Cleveland and Columbus lined the Statehouse stairs May 6 in Columbus with 1,000 pairs of empty shoes. The women were representing the National Council of Jewish Women in lobbying the Ohio Legislature in favor of women’s reproductive rights. In partnership with Planned Parenthood, the women visited legislators to express their opposition to three bills pending to limit rights. 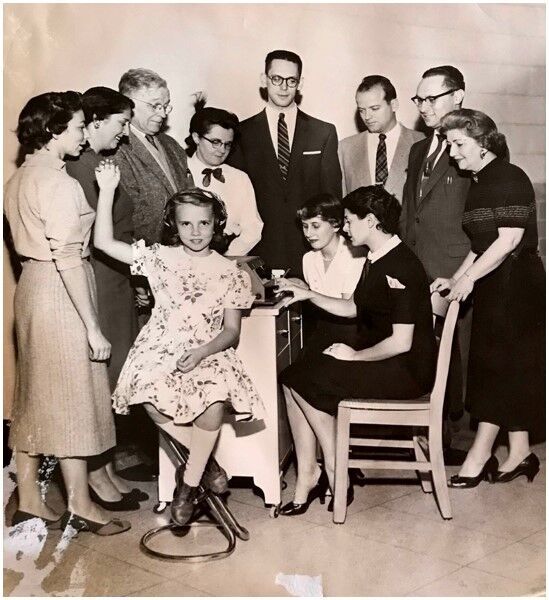 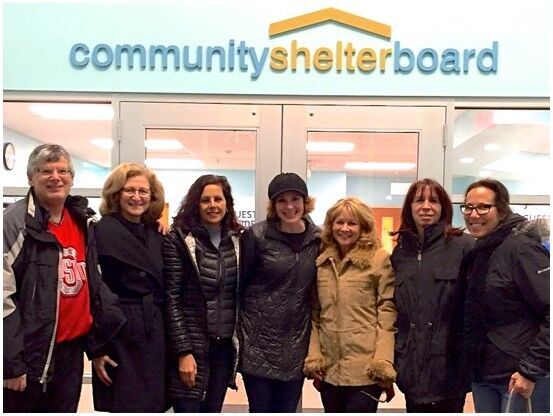 NCJW Columbus members smile for a photo at the Community Shelter Board in Columbus, where the organization donated computers for the shelter’s resource room. 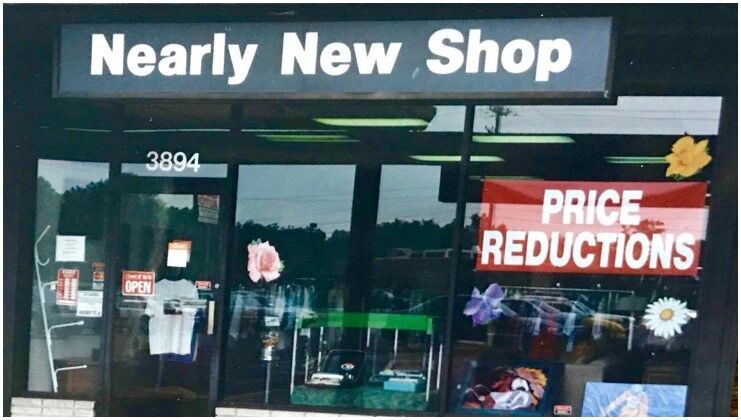 A photo of NCJW Columbus’ Nearly New Shop that was started via rummage sales in the 1950s. 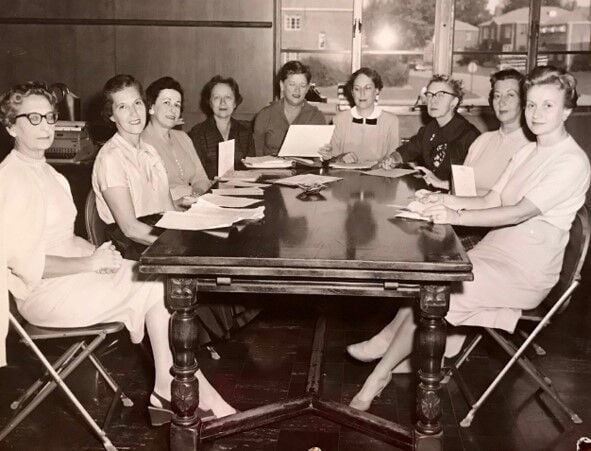 NCJW Columbus members work on the chapter’s newsletter in the 1950s. 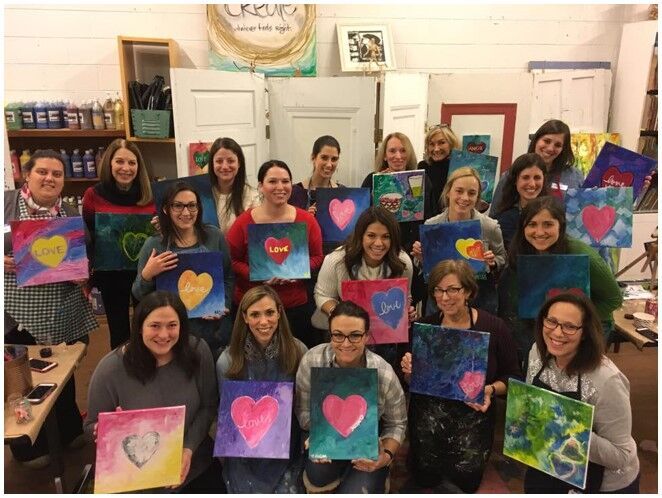 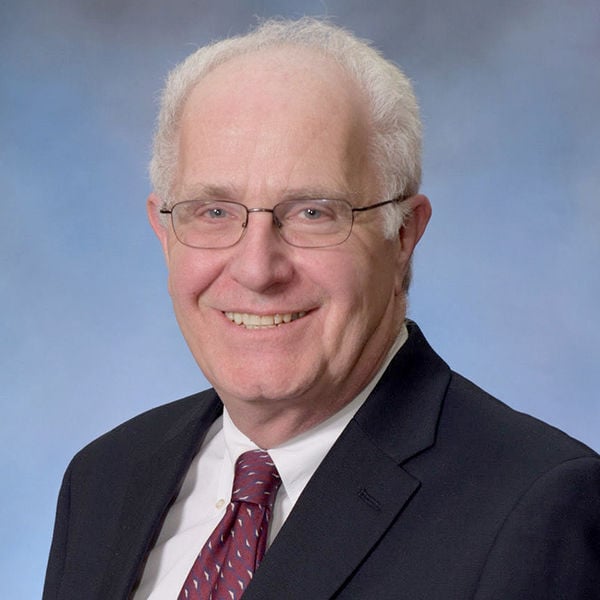 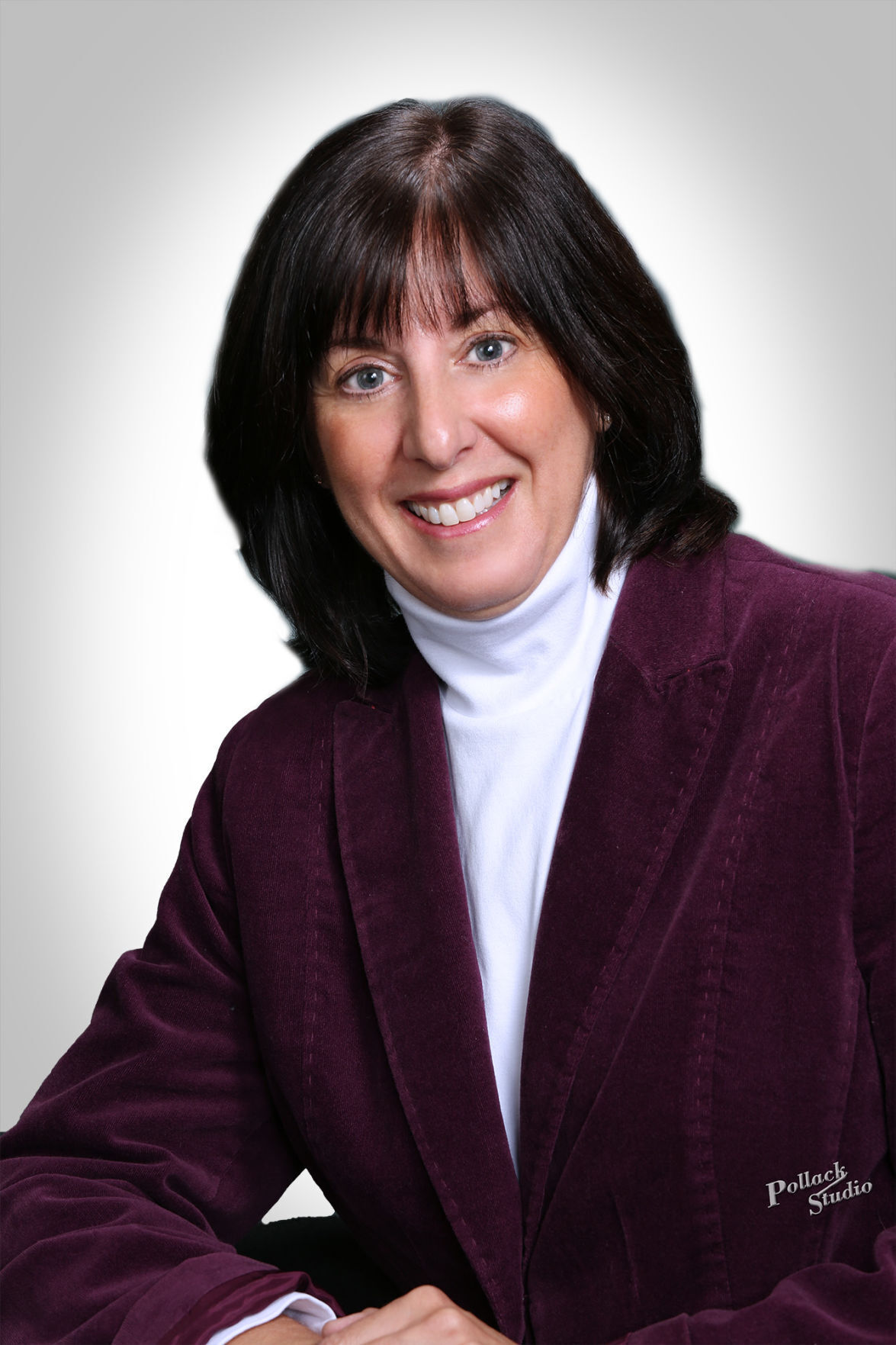 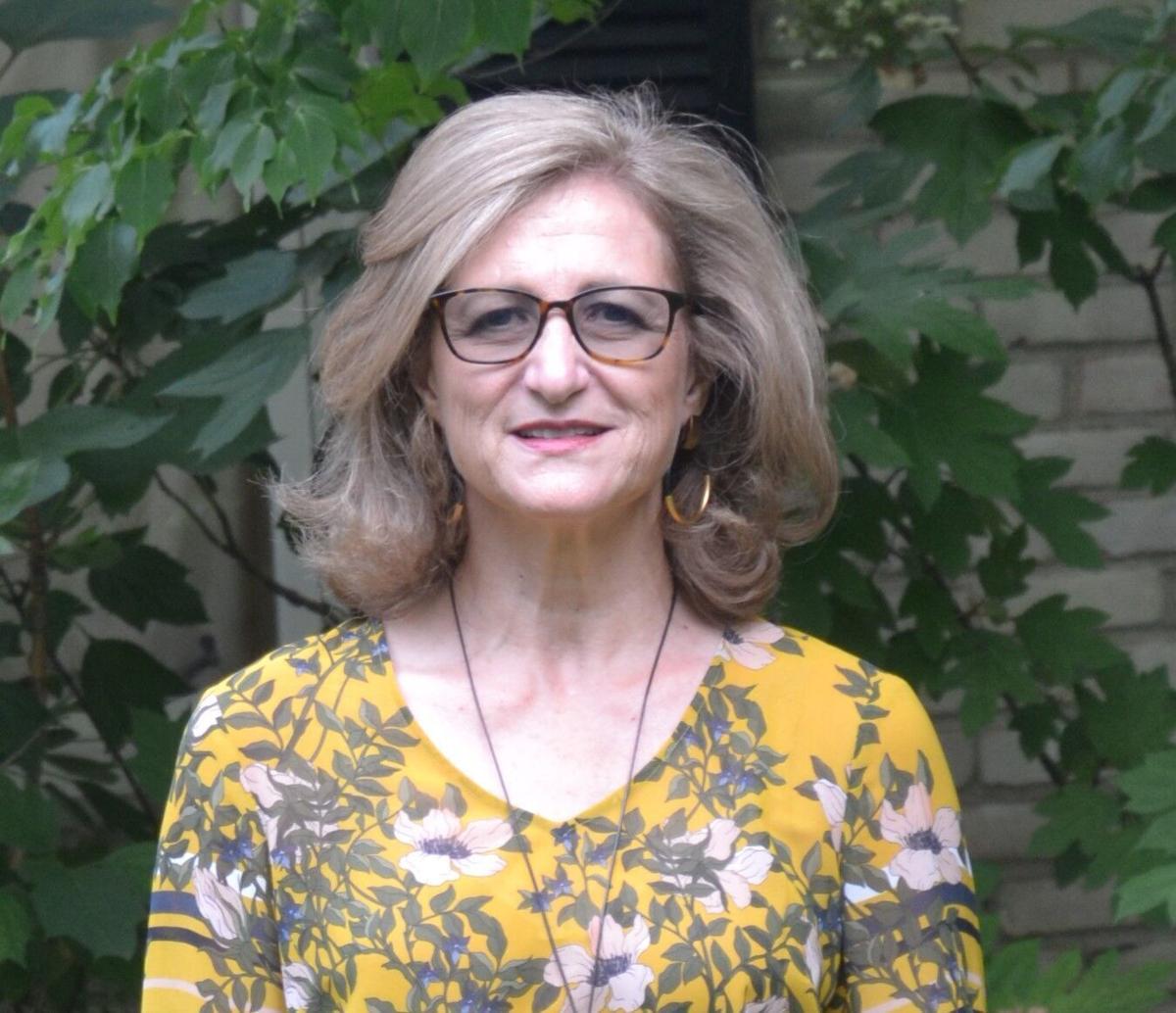 More than 200 women from Greater Cleveland and Columbus lined the Statehouse stairs May 6 in Columbus with 1,000 pairs of empty shoes. The women were representing the National Council of Jewish Women in lobbying the Ohio Legislature in favor of women’s reproductive rights. In partnership with Planned Parenthood, the women visited legislators to express their opposition to three bills pending to limit rights.

NCJW Columbus members work on the chapter’s newsletter in the 1950s.

In 1918, a group of Jewish women in Columbus rallied to fight inequalities plaguing society, founding the Columbus section of the National Council of Jewish Women. The group, which at one time had 500 members, spent the next century fighting human trafficking, creating community-wide health initiatives, providing aid to immigrants, supporting the homeless community, championing environmental solutions and pushing for reproductive rights.

However, this all came to an end June 30 when, unable to continue a lineage of leadership, NCJW Columbus closed its doors.

Closing NCJW Columbus “was a pretty heart wrenching decision,” former NCJW Columbus president Nicki Bloch told the Columbus Jewish News. “People might be wondering if we’re going to be leaving a big void in the role that NCJW filled or are there other organizations that we can turn to, to take on advocacy, to be a home for progressive Jewish women.”

End of an era

Bloch joined NCJW Columbus in 1996 when she moved to the area and a neighbor on the board invited her to check out the organization. It wasn’t long until Bloch was also a board member.

She and the advocacy group followed in their founders’ footsteps, fighting longstanding issues. They advocated for gun control, participated in women’s marches, established one of the country’s first shaken baby syndrome education programs for new parents, devised a teen dating abuse prevention program taught by NCJW volunteers across local high schools, and headed an arts and crafts program for homeless children at the YWCA Family Center.

NCJW Columbus also crafted a series of public policy forums on topics ranging from sex trafficking to freedom of choice. It aligned itself with pro-choice advocacy groups, including Planned Parenthood, the American Civil Liberties Union, NARAL Pro-Choice America and the Ohio Religious Coalition for Reproductive Choice to protect abortion rights.

The NCJW worked to improve access to reproductive health care, taught safe sex practices in high schools and advocated for lasting change at the state and national level, as well as partnered with local organizations to register voters and urge people to go to the polls.

Bloch’s favorite memory of NCJW was when the organization would select a WoMan of Valor to recognize every year. Members would gather in a big celebration and learn about the causes one person from the community led. The organization frequently commemorated life members and those in the community making a difference.

“As I’ve gotten older and learned more, I’ve found myself more and more aligned with the values of the organization,” Bloch said. “... A lot of us found our closest friends amongst our fellow members and board members because we’re a group of like-minded women who joined an organization to do good.”

NCJW Columbus “came to prominence at a time when women were barred from public roles,” Jacobs said. “They really remedied that by involving themselves and becoming a major presence in the community and in the work that they did.”

“They were always on the forefront of social change, championing the rights and needs of women and children and speaking out on issues of social and economic justice,” Jacobs said. “We took pride in their accomplishments.”

Mindi Axner, executive director of NCJW Cleveland, laments Columbus’ closing, especially given how much good the two chapters did fighting together on so many important issues.

“We never like to see when a section has to close for whatever reason,” Axner said. “Those issues we collaborated on included everything from gun violence reduction to women’s reproductive health and justice to voting rights and gerrymandering.”

The reason for NCJW Columbus’ closure was its inability to attract younger generations of members, both Bloch and Jacobs said. These membership problems had continued for a few years, but Bloch said the COVID-19 pandemic managed to speed up the seemingly inevitable disbandment.

When Bloch first joined NCJW, she recalled a diverse age group of members from their 30s to 90s. However, that range in age decreased as time went on.

“We did have a harder time over the years attracting younger people to join and become active,” Bloch said.

Seeing clubs of all kinds have to close their doors due to a drop in membership is unfortunately becoming the norm, Jacobs said.

“I’m sorry about NCJW Columbus closing, but I’m not surprised,” Jacobs said. “This is part of a current trend, the way that people use their time and how they work together as groups. ... Younger people need to get involved.”

As a final accomplishment, NCJW Columbus achieved the naming rights for the Space for CenteringPregnancy, to be located at the Heart of Ohio James B. Feibel Family Health Center in Whitehall.

Bloch explained this final effort was affiliated with the family of one of NCJW Columbus’ longest serving members, a former past president and WoMan of Valor.

Any remaining NCJW funding will go to the national section of NCJW, and any funds allocated by JewishColumbus to the Columbus chapter will remain with JewishColumbus.

All of NCJW Columbus’ memberships will transfer to the national arm of the organization and members have the option to join the Cleveland section, Bloch said.

Talks are already underway between the former Columbus arm and its Cleveland sister as to how to seamlessly transition Columbus’ members and projects.

Axner encouraged all Columbus members looking to continue their NCJW work to join the Cleveland section.

“One of the things that we always say is that there is strength in numbers,” Axner said. “With that connection, it only allows us to leverage our relationships, both at the state and at the federal level. ...This last year has shown us that we can still make plenty of things happen not being in the same 10 mile radius.”

Jacobs said while there is a trend of membership loss for clubs, it won’t be long until the pendulum swings back the other way to a more promising outcome for membership-based organizations.

“The issues may not be the same, but the social justice arena still has many opportunities where we’ll miss NCJW Columbus and their advocacy,” Jacobs said. “Others will have to rise to the occasion to fill that vacuum they so capably filled. I hope that there’ll be a younger generation that’s willing to relaunch an NCJW Columbus chapter 2.0.”

Publisher’s note: Jackie Jacobs is a member of the Cleveland Jewish Publication Company Board of Directors.

Columbus chapter of NCJW to close after 100 years

After 100 years in operation, the Columbus chapter of the National Council of Jewish Women will close as of June 30 due to difficulty in filli…