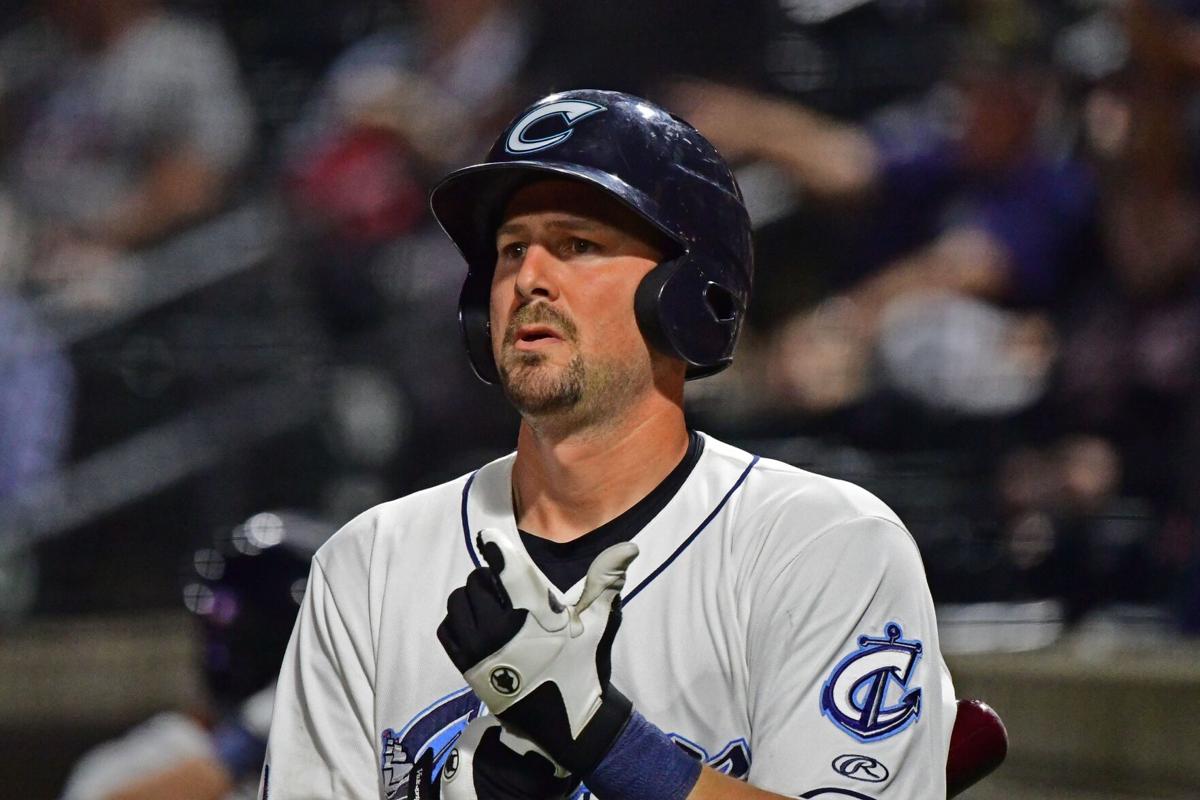 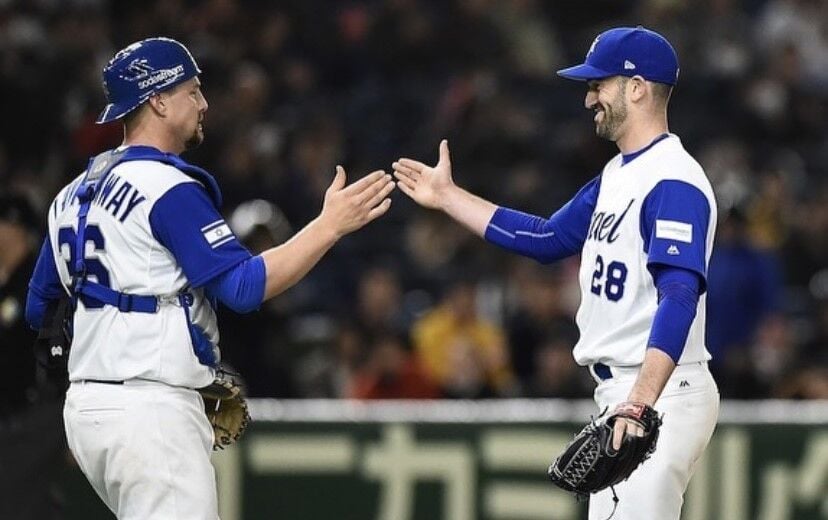 Ryan Lavarnway with pitcher Josh Zeid at the conclusion of a game at the 2020 Olympic Qualifiers. 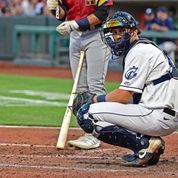 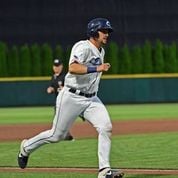 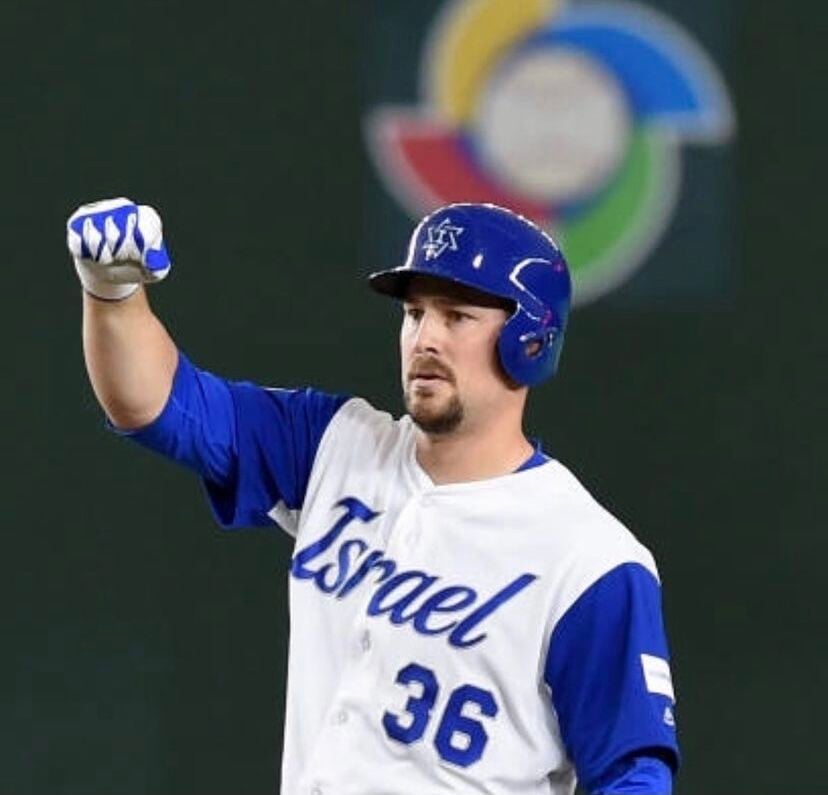 Ryan Lavarnway reaches base at the 2017 World Baseball Classic.

Ryan Lavarnway may not be a household name to most baseball fans in the United States. The 33-year-old catcher has played for eight teams in his 10-year Major League Baseball career, most recently playing for the Cleveland Indians and their Triple-A minor league team, Columbus Clippers.

On July 21, the career journeyman will travel with the Israel national baseball team to Tokyo for the 2020 Olympics. Japan and the Dominican Republic will play the first Olympic baseball game since 2008 on July 27, followed by Israel’s first game two days later against South Korea.

Because of his age and the fact baseball will not be played at the 2024 Olympics in Paris, Lavarnway told the Columbus Jewish News July 9 he will cherish this opportunity as much as possible.

“This will literally be the only opportunity for me to play baseball at the Olympic level,” said Lavarnway, whose mother is Jewish. “And it’s an opportunity that I never thought I’d have, and never dreamed of. But I’m looking forward to being an Olympian.”

Because he is a minor leaguer part of the 40-man roster, as well as an Israeli citizen as of November 2019, Lavarnway is eligible for the Olympics for the first time. Prior to this year, he played for Israel at the 2017 World Baseball Classic qualifier in New York, as well as the main tournament at the 2017 WBC in South Korea and Japan.

Israel came into the 2017 WBC ranked No. 41 in the world and finished the tournament in sixth place. In pool play, Lavarnway was 5-for-9, with a home run, three RBI and four walks. For this performance, he was named Pool A MVP, while Israel went 3-0 in that pool against the Netherlands, South Korea, and Chinese Taipei.

“We were a lot of guys that had either felt like we had been overlooked or hadn’t been given opportunities that we thought we might have with different organizations,” said Lavarnway, who added the 2017 tournament was the first time a lot of them had played alongside fellow Jewish players. “And a lot of guys that had roller coaster careers, maybe with more lows than highs.”

He gives credit to Peter Kurz, president of the Israel Association of Baseball and general manager of Team Israel, for assembling the team. Kurz has been the main driver in recruiting players and getting the team into tournaments like this.

This is the first time Israel qualified for the Olympics since baseball became a fully recognized sport of the Olympic Games in 1992. Lavarnway said it was harder to recruit talent for Israel earlier for a few reasons, including the fact there are few Jewish players, and the ones that were at the Major League level are not always available for the qualifiers to make it into these tournaments.

After their Cinderella story in 2017, Israel opened many people’s eyes to the fact there are Jewish players that can play, which has helped recruiting.

“When you’re trying to get more players, nobody wants to sign up to get your butt kicked,” Lavarnway said. “But if you have a chance to win, that’s gonna help. And with this Olympic team that we have with Ian Kinsler, Danny Valencia and some of these other guys that have had monster careers that are extremely talented, I like our chances.”

Israel will compete in Group B, where it will play one game each against South Korea and the United States. They will then play the team in Group A that finishes in the same place as Israel. The Dominican Republic, Mexico and Japan will be in Group A.

When it comes to evaluating a successful Olympics, Lavarnway said they need to consider just their participation in the tournament a success.

“It’s just a baseball tournament, it’s just entertainment, it’s just sports,” he said. “But the fact that we’re playing an international tournament, especially the Olympics, which is supposed to represent the best of humanity where we can put our differences aside and compete on a playing field as equals, I think the fact that we can hang the Jewish star, the Israeli flag and say we exist, we belong here, we deserve to be here, competing on an even playing field with the rest of the countries in the world, I think that’s a win in and of itself.”

Sue Bird reflects on her duty as US flagbearer

Japan bans fans at Tokyo-area Olympics venues due to virus

Trending in this section