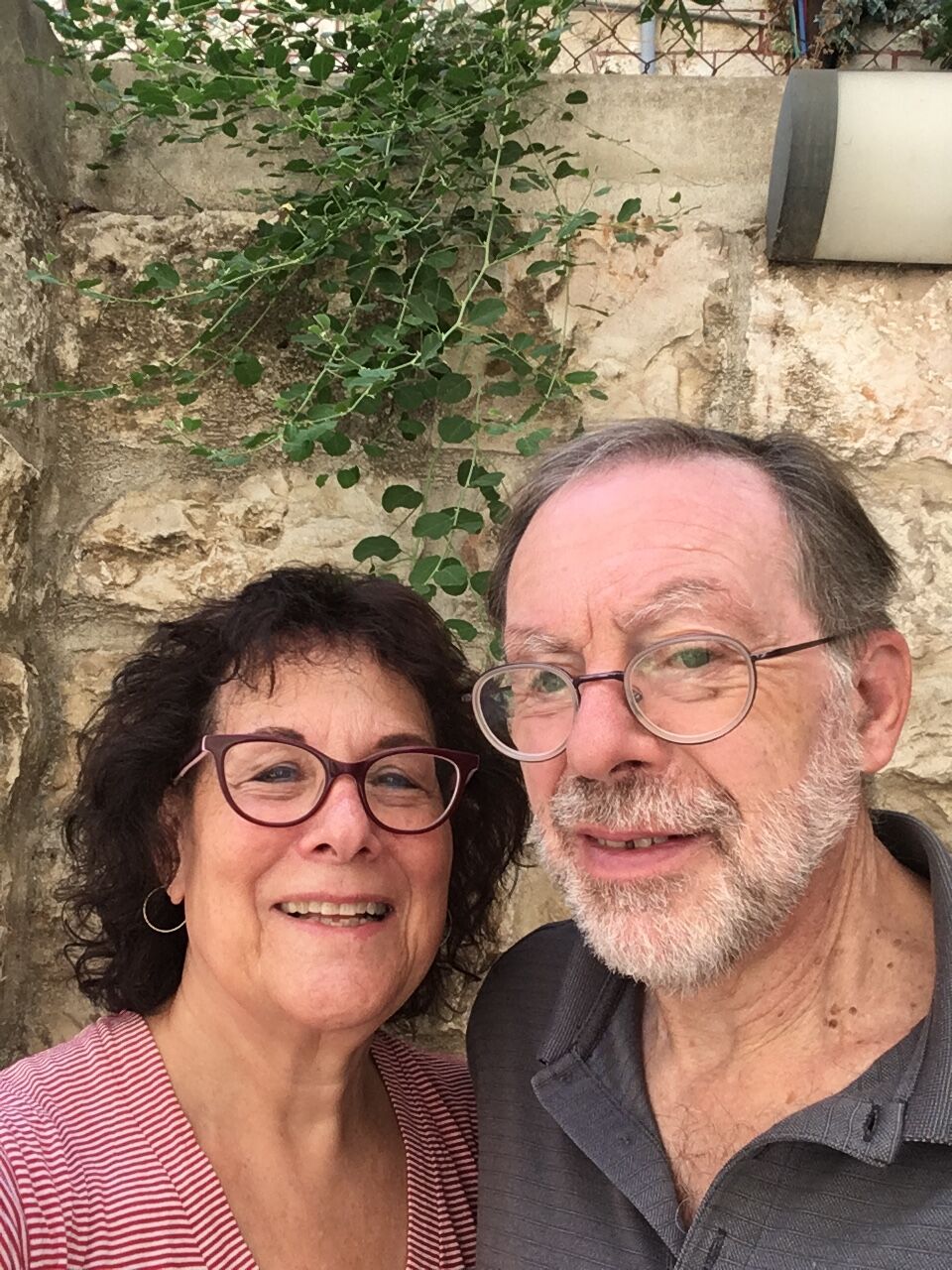 Julie and Irv Auerbach underneath one of the caper plants growing from their courtyard walls. 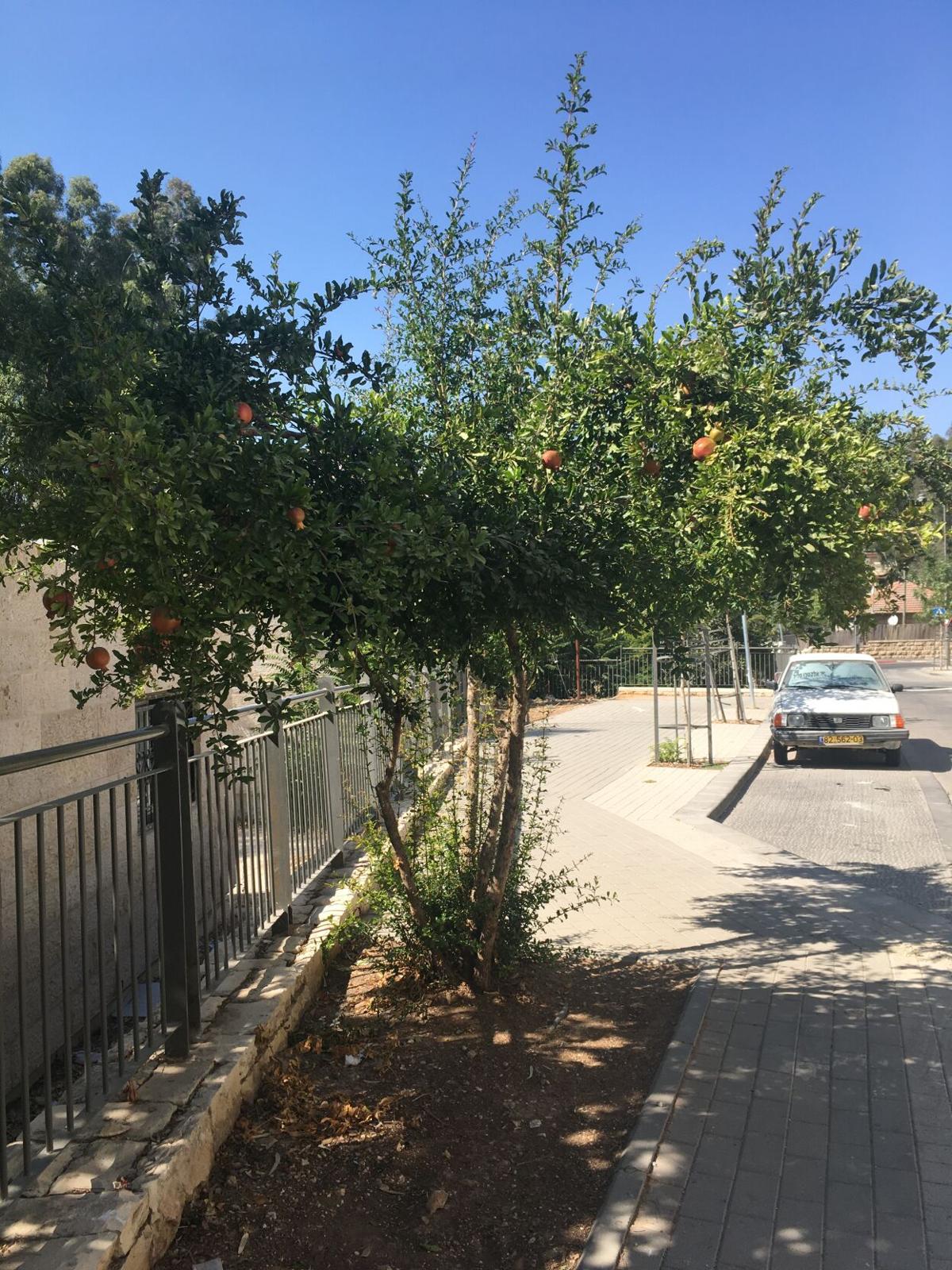 Pomegranate tree grow in a patch of soil on a public sidewalk. 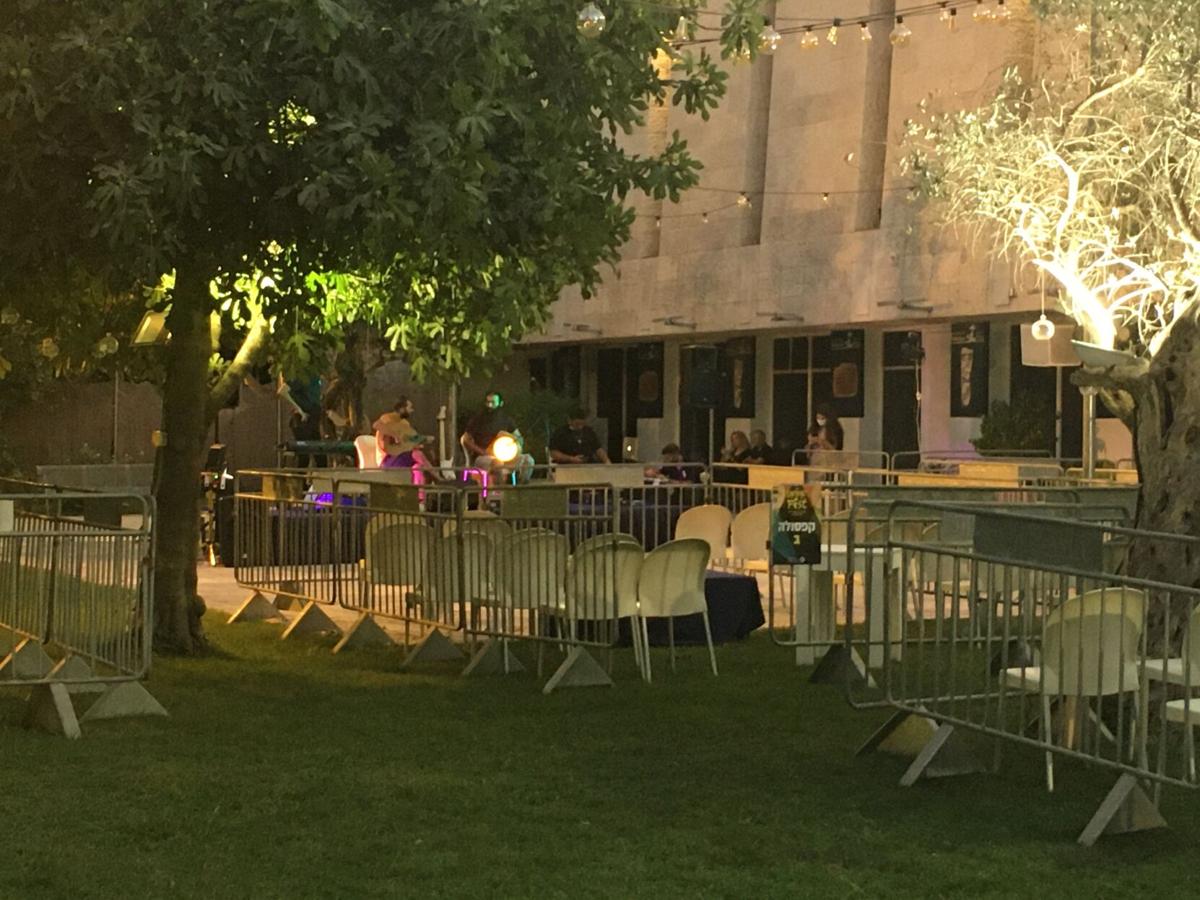 Example of capsule seating for 20 people in the garden at the Biblelands Museum in Jerusalem.

Julie and Irv Auerbach underneath one of the caper plants growing from their courtyard walls.

Pomegranate tree grow in a patch of soil on a public sidewalk.

Example of capsule seating for 20 people in the garden at the Biblelands Museum in Jerusalem.

Ruby red pomegranates hang from trees around the city, some in private gardens, others in squares of soil on public sidewalks. One such tree stands in Kehillat Yedidya’s garden, the site of the 40-person Shabbat minyan we attended in the spring.

Weekly changes from bud to blossom to fruit transfixed me, exposing the bittersweet reality that found us still here in Israel and not in Ohio. There are so many wonderful and unique to Israel things we are seeing, hearing and experiencing by the choice we made over the summer to stay at least through the upcoming chagim.

On early mornings we hear the traditional sounds of the shofar coming from the little Mizrachi synagogue next door. It holds maybe 20 men with overflow onto our small street, Zerubbavel. Similarly traditional, at least for the Jerusalem I know from stories about this time of year, was the man from the religious communities who came to our door, sharing his troubles and seeking tzedakah. Each has been a wake-up call in its own way.

“Elul programs” have been advertised at Pardes, Matan and others. Yedidya’s English-language Elul program featured published poet Alden Solovy and me. I introduced songs for the season by Jewish American musicians, accompanied by the guitar that I had clumsily stepped on in a Bedouin tent on the 1998 eighth-grade day school Israel trip. Repaired twice – most recently by a violin maker recommended by Cleveland ex-pat Danny Pallerv– my oleh (immigrant) guitar this year sounded better than ever.

Ever-creative Israelis in the culture industry have been making good use of space and weather. Some of the industry’s unemployed have been providing impromptu entertainment to the thousands at nightly protests on Balfour Street against Prime Minister Benjamin Netanyahu. Trying to make life as “normal” as possible and within the government’s social distancing guidelines, cultural institutions like the Biblelands Museum, the Khan Theatre and the Jerusalem Cinematheque were holding outdoor garden events, blocking off 20-seat capsules.

But we are also stiff-necked, so Tel Aviv’s annual Docaviv festival went online, and segments of the annual Israel Festival postponed from the summer. The Jerusalem Jazz festival was both live and online at the Israel Museum. In lieu of the summer’s traditional Israel Museum Wine Festival, friends of ours organized their own six-couple event in their backyard. Safely distanced, each couple introduced a favorite wine and then poured a glass for palates and comments. It was that week’s highlight for us.

Yet the coronavirus statistics continue to be troubling. Half of new infections are sadly coming from Haredi and Arab communities – communities where poverty and alienation are the greatest. On Sept. 13, Netanyahu announced a new, three-week countrywide lockdown, with schools, restaurants, malls and hotels shutting down to attempt to reduce the infection rate. Israelis also face restrictions on movement and gatherings. There are also likely to be changes in what holiday prayer and gatherings will look like.

We miss being with our family in Brooklyn this Rosh Hashanah. Meanwhile, my husband, Irv, has started planning a sukkah for our courtyard, which means trimming the wild caper plants once more growing out of the walls. Cut back severely as the summer began, these tenacious plants have reappeared with their sharp thin thorns and flower buds known as capers. I pickled the first crop and may have another batch soon.

And so I reflect: What will the coming year be like? Will it be like the caper, with painful thorns encroaching on tangy buds? Or rosy and full of seeds of sweetness like the pomegranate? After months of pandemic, we are praying for the pomegranate.

Shana tova to all of you in Columbus.

Submit a letter to the editor

Submit a letter to the editor The Columbus Jewish News provides an open forum for reader feedback and comments. Letters to the editor can be submitted via the form linked below, e-mailed to columbuseditorial@cjn.org or mailed to Letters, Columbus Jewish News, 23880 Commerce Park, Beachwood, Ohio 44122. All submissions must include your full name, city of residence and daytime phone number (phone number will not be printed).