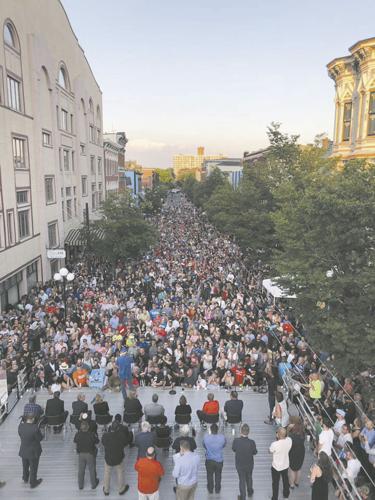 A vigil on East Fifth Street in Dayton’s Oregon District in memory of the nine people gunned down on the street earlier in the day, Aug. 4. 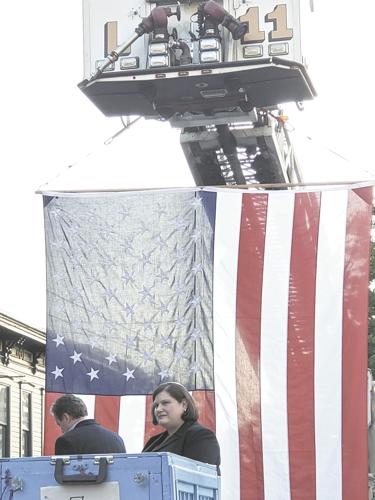 DAYTON – When Dayton’s Rabbi Karen Bodney-Halasz was asked to deliver a prayer during an Aug. 4 vigil in the city’s Oregon District – where earlier that day nine people were shot and killed – she already knew where to find words to fit the occasion.

The rabbis’ manual of the Reform movement, published in 2015, includes a prayer for “National or Communal Tragedies” written by Rabbi Edythe Mencher, a licensed clinical social worker.

“We mourn together over this senseless act of violence and destruction,” Bodney-Halasz, senior rabbi of Temple Israel intoned. “Help us, God, to rededicate ourselves to building a world that is safer for all people.”

Mass slaughter by means of assault weapon has become so frequent in the United States, rabbis can draw upon other recently created prayers, too. Alden Solovy – a prolific, celebrated writer of Jewish liturgy – wrote “After a Deadly Rampage” in 2012, based on the traditional El Moley Rachamim prayer for the soul of the departed.

“Seven years ago – after so many mass shootings – I wrote a prayer for use after a deadly shooting with a fill-in-the-blank to name the community,” Solovy posted on Facebook a day after the Dayton shootings. In the post, he noted Temple Beth Or, just south of Dayton, posted his prayer at its Facebook page that day.

The prayer begins: “Author of life, Source and Creator, grant a perfect rest under Your tabernacle of peace to the victims of the massacre in ______________ (add place of the event), whose lives were cut off by violence, a rampage of witless aggression beyond understanding. Their hopes were severed. Their dreams were lost to brutality.”

Clergy with Temple Beth Or had also recited Rabbi Mencher’s prayer at Dayton’s community wide service after the Pittsburgh Tree of Life Congregation massacre in October 2018.

As it stands now in the United States, it’s not a question of whether a mass shooting will occur in any one of our cities and towns, it’s a matter of when.

This is the new tax in America – our death tax. It might even be called a death lottery. For the privilege of living in the United States, from time to time, its residents will be slaughtered in packs of dozens. Sometimes randomly. Sometimes because they are of a type.

Yes, we’ve learned to run, fight, hide. And Dayton’s police, led by Chief Richard Biehl, are true heroes; they took down the shooter within 30 seconds after he began firing.

Even so, those among us of all ages and backgrounds now die – gunned down – in accordance with the way of our land.

The feature articles appear once again: How to talk to your children about the shootings. What should we tell them to lessen their anxieties?

How many times after yet another horrific shooting have we thought, “this time they’ll have to address it”? Even when members of Congress themselves were shot at during baseball practice in 2017.

Could the weekend that began with shootings in El Paso, Texas, and ended in Dayton be the turning point?

We have learned in Dayton that solutions to saving lives are more complicated than choosing from clunky options set up through false conundrums inherent in politics.

In 2017, Dayton had one of the highest opioid death rates in the nation. Community leaders, public health workers and law enforcement officers came together to lower that death rate. By the end of 2018, according to the Centers for Disease Control and Prevention, the opioid death rate here dropped by 54%.

Those who worked on this realized multiple factors contributed to opioid deaths; those factors needed to be dealt with. They studied the data. They listened to each other’s experiences. They heard each other. They developed a plan to hit numerous factors that contributed to the crisis. And they keep in constant communication. Dayton and Montgomery County have shown the nation it is possible, through nuance, to rise above politics for the good of their people.

So far, 2019 has been a rough year for Dayton – but one that shows the strength of our leadership and citizens to help each other through the darkest times.

On May 25, when nine members of the KKK-affiliated Honorable Sacred Knights of Indiana held a rally at Courthouse Square amid 500 to 600 counterprotesters – with 720 police officers in their midst – there were no arrests, violent incidents, citations issued or use of force by police.

“This was a multidepartment team assembled to ensure residents and businesses would remain safe,” Dayton City Manager Shelley Dickstein said at a city press conference hours after the KKK rally.

Two days later, our region was hit by 13 tornadoes – including two at the EF3 level (severe) and one at EF4 (devastating) – that killed one, injured hundreds, left hundreds without homes and basic services, and destroyed wide swaths to the northwest and east of the city.

An interfaith coalition put together another prayer vigil to remember the nine shooting victims at noon Aug. 5, not far from the Oregon District.

Bodney-Halasz was invited to deliver another prayer. This time, she turned to another from Solovy, which he wrote in 2016, “Against Gun Violence.”

A portion reads, “Source of justice, Rock of strength and truth, You call upon us to stand in the name of common sense and reason: to witness on behalf of the innocent and the cut down – the widowed, orphaned and bereaved – to answer the scourge of senseless loss, to advocate for gun control, to remove military weapons from a civilian population, to return sanity to our laws, our policies and our lives.”

Keyn yehi ratzon. So may it be.

Marshall Weiss is editor and publisher of The Dayton Jewish Observer.

Publisher’s Note: Weiss wrote this opinion column at the request of the Columbus Jewish News in response to the shooting that took place in Dayton on Aug. 4.  The CJN is committed to providing our readers news and commentary on the ongoing domestic terrorism affecting Americans everywhere.

Submit a letter to the editor

Submit a letter to the editor The Columbus Jewish News provides an open forum for reader feedback and comments. Letters to the editor can be submitted via the form linked below, e-mailed to columbuseditorial@cjn.org or mailed to Letters, Columbus Jewish News, 23880 Commerce Park, Beachwood, Ohio 44122. All submissions must include your full name, city of residence and daytime phone number (phone number will not be printed).